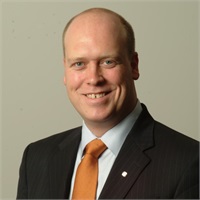 Born and raised in Sweden, Tony Krvaric was inspired by Ronald Reagan's optimism and unshakable belief in free enterprise, individual liberty, and limited government, vowing to one day come to America and pursue his own American Dream.

In 1992 he immigrated legally and arrived in San Diego, starting his own business in the computer industry. Six years later he discovered his passion; helping individuals and families make smart financial choices - and joined A.G. Edwards & Sons as a full service Financial Consultant.

After patiently going through the naturalization process for nearly thirteen years, Tony became an American citizen in 2003, calling it "one of the proudest days" of his life. He immediately registered to vote as a Republican and has never missed an election.

The firm's clients are typically current or retired entrepreneurs who value professional relationships based on trust and shared values. The firm employs the 10-step “Krvaric Process” to help clients reach their goals, primarily utilizing a fee-based fiduciary approach.

Tony is Chairman Emeritus of the Republican Party of San Diego County – where he served for 14 years as volunteer chairman, charged with electing and re-electing Republicans to all levels of government.

In his spare time Tony engages in causes that advance freedom, preserve our culture, and honor America's founding principles. He describes himself as socially conservative and fiscally moderate.

His values system stems from learning about the horrors of collectivism and communism that his parents suffered in Yugoslavia (present-day Croatia) and led them to seek a better life in Sweden.

Tony lives in the Scripps Ranch area of San Diego with his wife and their four children ("three boys and a princess.") The family attends St. Michael's Catholic Church in Poway where Tony is a proud Brother Knight of the Fourth Degree.

I have a passion for the world of finance and enjoy building relationships with our clients while providing excellent service. I have obtained the Series 7 and Series 66 securities licenses to better serve our clients.

I am also a Corporal in the United States Marine Corps. Outside of my professional and military responsibilities, I enjoy fishing, camping, working on my car, lifting weights, and playing the electric guitar.